The US Senate was presented a reconfigured House of Representatives’ health plan—H.R. 1628—on June 22, 2017. Crafted in closed-door, Republican-led Committee meetings, no public discussion was enabled prior to its receipt by senators for a vote. Meanwhile, A New Foundation for American Greatness—President Trump’s budget plan for 2018—was released on May 23, 2017.

Tax cuts for the highest-earning citizens are prioritized in both the Republican-crafted H.R. 1628 and Trump’s budget proposal, with a likely impact of weakening national public health infrastructure. A vote on H.R. 1628 probably will have occurred prior to your reading this article. However, regardless of whether H.R. 1628 is passed, the Trump Administration will not cease attempting to limit spending on “safety net” programs in order to pay for its priority issues (such as constructing a barrier wall along the Mexican border). 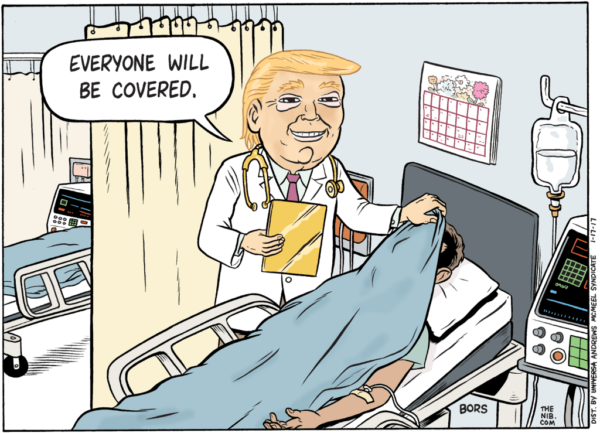 Low-income families, seniors, disabled individuals, and pregnant women stand to lose the most if Congressional conservatives—under the direction of the Trump Administration—prevail in determining how the Affordable Care Act (ACA) will be replaced or altered. Moreover, if their healthcare-targeted policies are enacted, all Americans will pay the price; societal responsibilities of government will be shifted to clinical providers (e.g., physicians), hospital and medical practice administrators, and community-based charity organizations.

The Senate health plan bill—entitled Better Care Reconciliation Act of 2017—includes steeper cuts to Medicaid than the original House bill passed on May 4, 2017, while increasing allowable tax credits for IRS 1040 filers earning enough to itemize deductions. In this way, low-income earners are doubly penalized. Meanwhile, older adults under 65 years of age can be charged five times more for health insurance than young adults (and it is well-known that “Baby Boomers” as a population are already deficient in retirement savings). Furthermore, the elderly demographic is rapidly growing in the US, and nursing homes are reliant on Medicaid to cover costs when their patients have outlived their financial resources.

While insurers cannot explicitly refuse to cover pre-existing conditions under the Senate-proposed ACA-replacement health plan, this version offers an obvious loophole to insurers. The loophole mechanism is that insurers can avoid covering pre-existing conditions through federal elimination of required Essential Health Benefits (EHB), as presented in a comparison chart published on June 22, 2017 by National Public Radio.

House passage of the first American Health Care Act (AHCA) version failed in March 2017, despite President Trump’s strong support for it. One reason was the CBO’s determination that 24 million people would lose their health insurance within one decade of its passage. However, the primary reason was utter opposition from the House Freedom Caucus, which perceived this bill as not completely eliminating all federal involvement in the US healthcare delivery system.

Only in May did the second AHCA version finally achieve passage in the House, and by a 217-213 vote. Some minor changes in this AHCA version were made to garner support from more moderate Republican members; one was a federal aid allotment of an additional $8 B to states for gap coverage of individuals with preexisting health conditions. This enabled enough buy-in from moderate House Republicans to enable the Senate Majority Leader (Mitch McConnell) to forward the process to the Republican-dominated Senate—even though the $8 B is not actually considered realistic for actual coverage of pre-existing conditions.

Despite the changes in the second AHCA version, the CBO report of May 24, 2017 still predicted 23 million uninsured people within 10 years (and 51 million uninsured by 2026). The CBO also reported on June 26, 2017 that H.R. 1628 would result in 22 million uninsured people. There is little doubt that elimination of the EHB requirement is likely to make comprehensive coverage less available and/or affordable to a large swath of the US population.

Lessons of the Great Depression: Why Safety Nets are Necesssary

The financial hardships endured under the Republican tenure of President Hoover led President Roosevelt to promote his “New Deal”—including establishment of Social Security—to aid the nation during the 1930s. Widespread collapse of unregulated banks had left people destitute and hopeless, and it is well-known that hopelessness can lead to mental health disorders, drug abuse, and increased criminal activities.

If approved by the U.S. Senate, the Trump budget alone would accomplish the following:

President Trump’s budget seeks specifically to decrease federal funding for SNAP by $190 B, and the Temporary Assistance for Needy Families (TANF) block grants to states—plus Native Americans living on reservations—by $15.6 B.

“Deepening poverty is inextricably linked with rising levels of homelessness and food insecurity/hunger for many Americans, and children are particularly affected by these conditions,” according to the American Psychological Association.

Smoking cessation programs, diabetes self-management, cancer screenings, and prenatal care are all embraced by public health prevention advocates. The EHB provision under the ACA has required health plans to cover a variety of prevention measures; this prevention inclusion was in recognition that health economics research consistently has shown prevention as less nationally expensive than medical treatment.

President Trump’s budget reduces funding by $222 M for public health prevention programs. Meanwhile, mental health and substance abuse coverage is costly to insurance companies, and removal of the EHB requirement means that plans inclusive of such treatment could also entail exorbitant deductibles to reduce the likelihood of their utilization, and/or high premiums to discourage their selection.

Adults who are disabled are generally unable to be as productive in the workforce as healthy individuals. The U.S. Bureau of Labor Statistics reported in 2016 that the employment-population ratio for Americans with a disability was 17.5%, as compared to 65% for those without a disability. Furthermore, a lack of adequate prenatal and/or maternal care will assuredly result in a nationwide increase in birth defects, and a future drain on the economy due to these children’s ongoing healthcare needs.

The following are just some of the healthcare associations and organizations opposed to the Senate ACA-replacement bill (as well as both versions of the AHCA):

Middle-Aged Population are a Prime Target of TrumpCare

The demographic in the “cross-hairs” of Trump’s healthcare policy and the AHCA are adults who are between 50-65 years old, according to an analysis by the Commonwealth Fund. Individuals in this age group—who are not yet eligible for Medicare—are more likely to have chronic conditions and consequently become laid-off from employment than younger workers. The diverse budget cuts and policies with specific implications for older individuals suggests especially rough times ahead for middle-aged adults.

Increasing Inequality Will Be the Legacy of the Trump Presidency

The Washington Post on May 23, 2017 included an article entitled How Trump’s Budget Helps the Rich at the Expense of the Poor. It describes Trump White House policies related to tax cuts in relation to draconian funding cuts aimed at the poorest individuals (including those with long-term disabilities). While tax relief is desired by wealthy individuals, the transfer of financial assistance through Trump’s budget—if enacted—markedly shifts assistance away from already impoverished individuals. This would disproportionately affect African-Americans. Indeed, 9% of Caucasians in the U.S. live below the Federal Poverty Level (FPL) as compared to 24% of African-Americans, according to the Kaiser Family Foundation.

There is no human being who cannot develop a health disorder such as cancer, and this type of life-changing diagnosis can drain the financial resources of even higher income middle-class families. For example, when a spouse succumbs to a life-threatening illness, the remaining spouse often has utilized retirement savings for caregiving. This is especially the case where inoperable cancer or another long-term illness is the cause of death. The result is that the surviving spouse often has diminished financial resources to meet their own future basic needs.  That individual may also be the only wage-earner to support the children, or that wife or husband may have left the workforce to care for the terminally-ill spouse.

If President Trump’s policies prevail and any version of the AHCA becomes law, it may become only a matter of luck as to whether someone loses all financial security by mid-life. Even an ill individual making a high salary may lose everything if unable to cover the cost of a high monthly premium or deductible (or if expensive daily medications are required).

The federal government requires tax revenues to fund federal grants for scientific research of all types. Academic medical centers are dependent on federal grants to perform basic science research (such as enabled mapping of the genome), conduction of clinical trials to ensure future patient safety, and to cover the salaries of their postdoctoral fellows. Meanwhile, pharmaceutical and biotech companies are dependent upon medical research centers to support their R&D efforts.

The tax cuts in the Trump Administration budget are aimed at providing relief to the wealthiest individuals and corporations; it thereby reduces potential annual federal revenues regardless of reduced funding for Medicaid. Even without the increased expenditure proposed in the Trump budget for the military and the Dept. of Justice’s expanded INS efforts, federal revenue has not matched required payments (i.e., annual amounts budgeted toward paying off the national debt).

Physicians and hospital administrators in the Trump Era are left to shoulder the burden of caring for people who cannot afford healthcare. Since conservatives in Congress—as well as the Trump White House—view the federal government as not having a role in healthcare delivery, their ACA replacement goal includes elimination of any requirement that individuals in the US have health insurance. This required coverage of nearly all Americans was a central tenet of the ACA, as insurers need healthy enrollees to off-set costs incurred by those who do utilize insurance coverage. Without that fundamental ACA requirement, there is every reason for insurance companies to become anxious about their potential net worth, and raise premiums (and deductibles) to avoid potential future bankruptcy.

The Affordable Care Act successfully integrated mental health and physical health, which had been covered separately. Trumpcare does the opposite, classifying mental health care as a “non-essential” benefit, meaning that states, employers, and / or insurers will decide if the 1 in 5 Americans who struggle with mental illness will be covered at all, if Trumpcare passes.

In fact, according to NAMI , the House bill allows states to let health plans:

Apply that to this one simple statement concerning mental health: the World Health Organization determined that depression is presently the leading cause of disability worldwide, and is a major contributor to the overall global burden of disease and you begin to understand the magnitude of what we are facing with repeal. . .

The fact that the U.S. healthcare system is dysfunctional is well-recognized. Cruel and mean-spirited policies that target the most vulnerable populations do not bode well for upholding democratic ideals or for a stable economy. As antibiotic-resistant infections are emerging and spreading, it is imperative that enough funding for healthcare research and treatment exists to preserve the nation’s health. Therefore, it is vital that Trump’s policies become an aberration, and that compassion towards low-income and disadvantaged Americans prevail in the form of health and social service safety nets. There is no crystal ball for anyone to know with certainty that a safety net will be unnecessary at some point. This is why these safety nets exist, and our public health depends upon their continuation.

Enhancing Customer Service the Disney Way: The Psychology of Intention
Scroll to top